So, what the hell happened?

Constantin Gurdgiev, Brian Lucey, Ciaran Mac an Bhaird and I put together a paper that tries to answer that question (in the Irish context).

Hopefully it will provide a good backgrounder to any readers of this blog who might occasionally wonder how a seemingly prosperous country can fall so far so fast.

..and what it says about the banks.

Today saw the release of the Labour/Fine Gael programme for government that was passed by both parties and which will therefore form the policy basis for the new government which is due to be announced on Wednesday.

I was interested to see how the new government was going to deal with the hospital pass parting gift from Brian Lenihan when he refused to recapitalise the banks in the dying days of his government, saying he ‘didn’t have a mandate to spend the money.’

Now, Lenihan’s reasons aside, there are a few interesting things to take from the Irish Times report linked to above:

Speaking last night, Mr Lenihan said the decision was taken with the approval of the EU, the IMF and the European Central Bank (ECB).

However, the IMF said the bailout conditions should be adhered to. It said last night that Ireland had the resources to recapitalise its banks and it was important that the delay was temporary.

A spokesman for economics commissioner Olli Rehn said the EU expected the delay to be “temporary”, and for the recapitalisation to proceed as agreed.

So, both the EU and the IMF say that the delay in recapitalising the banks must only be a temporary - the impression seeming to be that it was just a delay until the new government took over and then allowed the recapitalisation to go through.

So, now we can turn to the Programme for Government and find the piece in it when they say “We will immediately recapitalise the banks with the €10bn they are due under the EU/IMF deal.”

Well, we can’t find it, because it isn’t there.

Instead the new government partners say:

• We will attach the utmost priority to avoiding further down-grades to our sovereign credit rating by setting further capital spend by the State on bank re-capitalisation at a level that is consistent with national debt sustainability.

First, where do the partners put “further capital spend by the State on bank re-capitalisation at a level that is consistent with national debt sustainability“? The general government debt of Ireland is already at 94% of GDP.  Putting a finger on what is sustainable is always hard, but looking at anemic growth with debt servicing costs at (average) 4.3% and rising, it would appear that Ireland’s debt is already unsustainable.

That is perhaps a worry for the future though.

In the more immediate term, that the government does not intend to recapitalise the banks before they fail the stress test ( as they surely will without the new capital) is going to cause much more difficulty for the new partners. It flies in the face of what the EU/IMF said on the 10th of Feb when Lenihan put off the recapitalisation, and is certainly going to cause friction between Ireland and its European ‘partners’.

Will be interesting to see who blinks first in the coming weeks..

The Governing Council of the European Central Bank (ECB) has today decided to continue conducting its main refinancing operations (MROs) as fixed rate tender procedures with full allotment for as long as necessary, and at least until the end of the sixth maintenance period of 2011 on 12 July 2011. This procedure will also remain in use for the Eurosystem’s special-term refinancing operations with a maturity of one maintenance period, which will continue to be conducted for as long as needed, and at least until the end of the second quarter of 2011. The fixed rate in these special-term refinancing operations will be the same as the MRO rate prevailing at the time.

Furthermore, the Governing Council has decided to conduct the three-month longer-term refinancing operations (LTROs) to be allotted on 27 April, 25 May and 29 June 2011 as fixed rate tender procedures with full allotment. The rates in these three-month operations will be fixed at the average rate of the MROs over the life of the respective LTRO.

Despite the recent falls in demand for the facilities across the eurozone, current imbalances mean that this will be very good news for some banks, who may have worried that the taps would be turned off sooner.

As expected, this morning’s number for the Marginal Lending Facility at the ECB has returned to levels that could be considered normal, standing at €1.246bn (down from €15.1bn the previous day)

So, the short term problem seems to be over. Now we just need to sort out the very long term problem of Irish Banks reliance on Central Bank funding.

Yesterday, as expected, NAMA rolled over all its issued Namabonds for another year.

Previous to yesterday, NAMA had 9 outstanding senior bonds valued at €28.666bn with a coupon of 1.134%, which were duely cancelled.

The new bond has made the list of eligible collateral for ECB operations, with the old bonds removed from the list.

As part of the January Money and Banking statistics, the Irish Central bank has very helpfully provided a statement of the financial position of the covered institutions.

It really is not pretty: 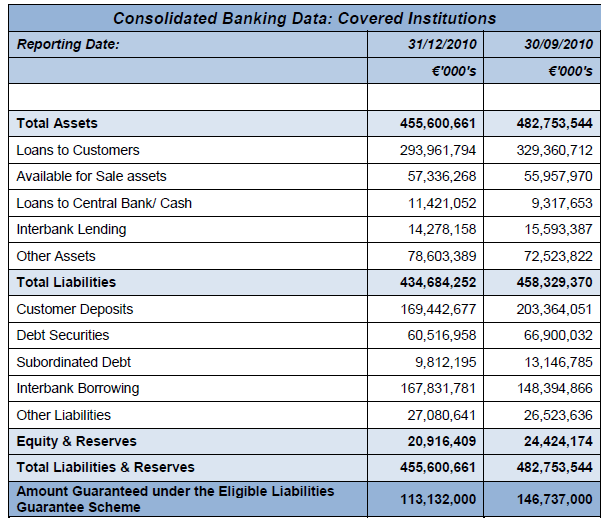 Borrowing from banks is only €1.6bn less than total customer deposits in the covered banks. This, frankly, is nuts.

It also means that if the ECB does anything in the near term to change the access these banks have to that borrowing it will have the same effect on the Irish banks as a good old-fashioned bank run.

(note that the above only covers to end Dec 2010, so does not include the FRNs issued in Jan)

Or ‘How to spell Financial Legerdemain.’

We speculated here last month on the issuance of FRNs by the Irish banks and presumed there would be a corresponding fall in the Irish Banks need to access the Emergency Liquidity Assistance provided by the Central Bank of Ireland.

Well, it seems the speculation has been correct.

Today the Central Bank of Ireland released its January ‘Money and Banking statistics‘.

In it they, include this explanation of the FRNs:

Uncovered “own use” bank bonds – In recent weeks, a number of credit institutions have issued bonds which they retain for their own use. The ECB has authorised the use of these bonds in substitution for collateral that is no longer eligible in normal Eurosystem operations; this reduces the need for reliance on exceptional liquidity assistance (ELA). Just as with ELA, credit risk to the Central Bank in respect of repo operations on these bonds is effectively mitigated by Government guarantee inasmuch as these bonds have been issued under the ELG scheme.

So, there it is in black and white - banks issue bonds to themselves which they get the gov to guarantee, which the ECB then accept for repo operations. Of course, from the ultimate liability point of view, nothing has changed as the Iriah Taxpayer is still very much carrying the can on these bonds.

From the Irish Central bank’s point of view, the ELA in the next report had better show a really big drop. This transaction is bad enough if it is just moving liquidity, but if it is being used to create even more liquidity for the Irish Banks, then we are on a hiding to nothing.

Last Thursday the sale of deposits and associated assets from Anglo and Irish Nationwide was completed. For background see here and here.

The assets in the deal were €12.2 (nominal) from Anglo to AIB and approximately €3bn (nominal) from INBS to Irish Permanent - INBS did not have enough Nama bonds to fully cover the deposits being transferred.

So it is hardly surprising that Marginal Lending Facility at the ECB has jumped from €2.2bn on Friday to €17.12bn this morning - an increase of €14.92bn.

Looking at the story wrong..

I think I might have been looking at the Anglo/INBS sale wrong.

No, not the chart but the reason for the sale.

Let’s s start with a question: Why are Anglo selling their deposits? A. Because they are being wound up.

So, what does Anglo have on it’s books of any value? Well, it has NAMA bonds which are fully state guaranteed and can be repo’d via the ECB at a tiny 1.5% haircut. So, in a liquidation/winding up of the bank, they would be handy to have in order to help pay the creditors.

But, there are plenty of other (state owned) banks out there who would like those assets too. So here’s an interesting ruse. Let’s asset strip Anglo before it is wound up/put into liquidation and move the good stuff to another bank that needs propping up. Of course, it leaves the creditors of Anglo at a disadvantage because there will be less to pick over. But it does mean that the good stuff stays in the banking system where it can provide liquidity, rather than tied up in some holding company as Anglo is wound down.

Anglo has NAMA bonds (net of deposits) of €3.6bn. It also has promissory notes (€26bn) repo’d at central bank. Also it has something called a ‘masterloan repurchase agreement’ with the CB where it can securitise any old crap.

Now, if Anglo only sold NAMAbonds to cover the deposits, the €3.6bn would remain with Anglo ‘holding company limited’ and be used to pay down creditors.

But, instead, the NAMA bonds are sold to AIB, who get the money as outlined in this post. The money received for the bonds go back to the CB and so disappears off Anglo ‘holding company limited’s’ balance sheet.

AIB are happy, as they have more high qulaity assets, Anglo don’t care anymore as they are no longer a bank, and Anglo’s creditors find that the cupboard is bare (but nobody really cares about them).

So, to my mind, it is not correct to call this a sale of a deposit book, rather it is an asset-strip before a liquidator is appointed.

The deposit book thing is a red-herring. After all, the deposits are as safe in Anglo as they are in AIB (covered by the same guarantee).

(note, with the Permanent/INBS sale the deposits amounted to more than the NAMAbonds INBS held, so there was no extra asset traded)

Now, the obvious question is: Where the hell did AIB get €3.5bn in cash for this deal?

Well, it seems, (from reliable sources) that the deal worked like this: